Hawksford Singapore’s recently released Singapore Business Formation Statistics Report concludes that the outlook is bright for the second half of 2015 despite the tepid global economic recovery which weighed down global economic growth in Q4 of 2014.

The final report of 2014 identified global trends that have impacted Singapore business formations before undertaking an in-depth analysis of company formation statistics. The report concluded that a decelerating China and subdued domestic consumption in emerging economies together weighed down global economic growth in Q4 of 2014. Despite this, the year finished positively with a record number of business formations in the final quarter. 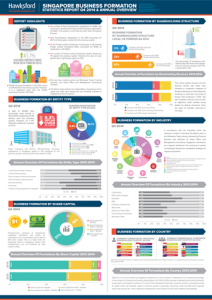 ‘We have seen some interesting trends emerge in Q4 of 2014, and indeed throughout the whole of 2014. What is most pleasing to see is the level of business formation activity, despite what are challenging economic circumstances,’ said Jacqueline Low, chief operating officer, Hawksford Singapore.

Looking forward, the report predicts the US’s recovery will strengthen in 2015. However, the weak recovery in the Eurozone and continued moderation in China will weigh down on Singapore’s growth in the first half of 2015. The plummeting oil price will impact Singapore’s important trade partner, Malaysia, which is an oil exporting country. Despite this, Singapore’s growth outlook remains favourable, aided by strong domestic demand and an improving global economy.

The report predicts that falling energy costs will benefit many Asian economies, which are predominantly oil importers, thus freeing up government funds for infrastructure and developmental projects. This will open new opportunities for Singapore. Individual consumption will also increase, aided by lower fuel and food costs bringing economic spinoffs to Singapore. The government’s productivity schemes and the country’s integral strength will benefit from the improving global economy by the second half of 2015. The report anticipates that any faltering in the beginning of the year from the current trend in the business formation numbers will be compensated by a pickup as the new year progresses.

‘It looks as though initiatives, such as the share capital clause of the Singapore Company Act as well as the improving economy the US will also stimulate further growth, balancing the challenges that Europe and China are currently facing. I look forward to reviewing our Q1 2015 report, when the data comes in, to see if these positive trends continue,’ concluded Ms Low.

The Q4 2014 report shows that although the total number of Singapore business formations is lower than the preceding quarter, it is in line with the trend observed in previous business years. But when compared to the average of previous years, the total number of new businesses formed has far
exceeded the trend. The average for the last quarter usually hovers below 15,000, but Q4 of 2014 set a new record with a total of 20,540 new business registrations.

Singapore continued to attract enterprise and individual investors from diverse geographic origins. The share of foreign individual shareholders increased to 25% in Q4 from 23% in the previous quarter, with Chinese entrepreneurs accounting for the second largest share. 52% of the subsidiaries formed in Q4 boasted corporate shareholders from foreign countries.

Interestingly, a total of 176 Branch Offices were setup in Singapore during 2014, as against 98 in the previous year. This reflects the unwavering preference for Singapore as a location for business expansion efforts and the growing confidence in Singapore as a regional hub. In Q4 alone 46 Branch Offices were set up, a strong endorsement of Singapore’s resilience despite the challenging economic conditions that have prevailed during the quarter.

Hawksford Singapore has been publishing the quarterly report, which contains statistics and in depth analysis of business formation activity in Singapore, since 2010.